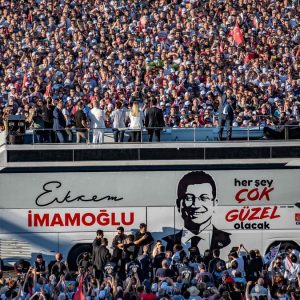 Populism of the most hateful sort has had a baleful presence in the headlines for the past two years, but now a very different political perspective is challenging it, without animus. It’s called “radical love” and had its first electoral win on June 23, when Ekrem Imamoglu was elected mayor of Istanbul, Turkey’s largest city.

However, much before then, on the other side of the world, US Senator Cory Booker was speaking of “radical love”. Mr Booker, who represents the state of New Jersey, is one of the crowded field of Democratic Party candidates seeking to replace Donald Trump in the White House. He has chosen to do it by talking of a new way of politics. And in the days since Mr Imamoglu’s stupendous victory in Turkey’s financial capital, a UK-based political platform called The Alternative has been talking up the idea. It has expressed admiration for “the emotional, poetic language that’s being used in the radical love strategy” in Turkey and suggests it could have powerful appeal in a country polarised by Brexit.

So, what is radical love and can it really remake politics? In itself, it is an attractive concept. In Istanbul, radical love radiated a message of optimism and undiscriminating regard for everyone — including voters with a propensity to support Turkey’s long-time president Recep Tayyip Erdogan. Mr Imamoglu’s campaign steadfastly eschewed criticism of Mr Erdogan’s authoritarian tendencies, his divisiveness, fear-mongering and repeated onslaughts on Turkey’s institutions and on the checks and balances of Turkish democracy.

Instead, Mr Imamoglu took an upbeat approach and the Republican People’s Party steered a determinedly high-minded path. It was described by the party’s national campaign manager Ates Ilyas Bassoy as follows: “We had two simple rules: ignore Erdogan and love those who love Erdogan. The whole strategy depended on this.” In fact, that was the core message of Mr Bassoy’s Radical Love Book, which was distributed to party activists some months ago and stressed the need to let go of “the language of rage” and speak the “language of love”.

In the US, Mr Booker’s campaign of radical love has been similarly focused on what he calls the “revival of civic grace, having a more courageous empathy” and recognition that America is a country of “common interests and common pain”.

In the UK, The Alternative says it wants to bring about “a friendly revolution” in response to the “broader forces and trends, which are (intentionally) coarsening citizens’ responses to each other”. The Alternative says it is inspired by and associated with Denmark’s green political party Alternativet, founded six years ago as a “generous, action-oriented” organisation.

Clearly, radical love is beyond reproach as a philosophy of life. But can it really be a powerful political force? Isn’t it so anodyne as to be no more than a distillation of well-worn lectures on civics and brotherly love? After all, Mr Imamoglu’s emphatic win could be ascribed just as easily to factors other than radical love. Turkey is suffering the effects of rampant inflation, flagging growth and currency collapse, and there is a marked dissatisfaction with the president. There were also a number of missteps by Mr Erdogan’s governing Justice and Development Party in its approach to the local elections in March and the June re-run of the Istanbul mayoral ballot.

Sceptics could also point to radical love’s apparent failure in India, where the general election ended a few weeks ago with a second-term win for the Hindu nationalist prime minister Narendra Modi. Ahead of the polls, opposition leader Rahul Gandhi made a point of hugging his rival and speaking of his “love” for him. If that was radical love, it didn’t work for Mr Gandhi. So, does India tell us anything about its limitations as a political strategy?

Not really. If anything, Mr Gandhi’s election defeat may show that radical love can only succeed if it is sincere and wholehearted. Unlike Mr Imamoglu and the Turkish opposition, Mr Gandhi, his Congress party and political allies railed at Mr Modi and spoke in polarising terms about the Bharatiya Janata Party. Nor did they offer a compelling alternative political vision.

In the US, just as in Turkey, Mr Booker has been stressing the need for “fierce, ferocious love”. Rather than talk in a way that “slices and divides” the US, he has been listening to Trump supporters. In one of his anecdotes he talked to “a guy with a Make America Great Again shirt in a diner in Iowa… and spoke to his pain.” Mr Booker’s presidential campaign is yet to catch fire. But already there are signs his radical love message is having some impact, at least within the political class. David Applefield, a Democrat running for Congress from a district in Mr Booker’s state, says he reminds himself daily of Martin Luther King’s words: “I have also decided to stick with love, for I know that love is ultimately the only answer to humankind’s problems.”

Win or not, radical love introduces into politics something that Berkeley sociology professor Arlie Hochschild calls “emotion work”. Ms Hochschild, who wrote a bestselling study of the American right, says radical love is “about mastering a temporary suspension of self — not a suspension of moral commitment, but of self…”

In many parts of the world, it may be the only way to transcend the politics of hate, divisiveness and fear.

Originally published at https://www.thenational.ae on July 2, 2019.