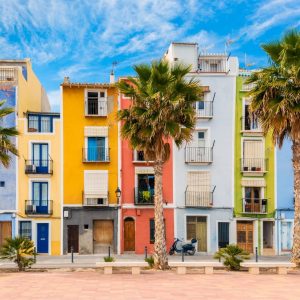 Spain is in Europe and part of the European Union, and is also part of the European Economic Area (EEA), allowing it to participate in the European Market trade and share in the region’s wealth. However, as with all EU members, the economy of Spain is fuelled by its own individual sources of income, chief among these being agricultural exports and, least surprisingly, tourism.

What type of economy does Spain have?

Spain’s economy is a mixed capitalist economy, made up of a combination of private freedom combined with government regulation and centralized economic planning.

According to the latest estimates of the International Monetary Fund (IMF), Spain is the 15th largest economy in the world in terms of PPP, and Spain’s GDP ranks 32nd. In comparison, its neighbours France and Portugal rank 19th and 43rd in terms of GDP per capita.

Spain is still considered a country with high economic equality: the poùlation density is 94 people per Km2  and roughly 21.6% of the population lives under the EUR 8,500 (annual income) poverty threshold, according to the latest Spanish Statistical Office data.

Compared to a EU average of around 19%, social expenses in the public budget only account for roughly 17% of the total GDP.

What is Spain’s biggest source of income?

One of the most interesting facts about Spain’s economy is that a large part of its GDP (around 20%) is accounted for by the industrial sector, which also contributes to a major portion of total employment in the country.

Within this sector, around 20% of Spain’s total GDP is accounted for by its manufacturing services, especially in the production of metals, machine tools, pharmaceuticals and medical equipment, and textiles and apparel, including footwear.

Agricultural businesses in Spain also greatly contribute to the country’s total GDP (around 2.8%), and employ around 4% of the total workforce. These include almost one million agricultural and livestock businesses, and a large number of producers of crops such as wheat, barley, tomatoes, and citrus fruits.

One of Spain’s main exports in the agricultural sector is olive oil and it is actually the world’s largest exporter of the product. And, as it boasts a large number of vineyards, it is also the third largest producer of wine worldwide.

However, the main source of income for the country is undoubtedly Spain’s tertiary sector, which contributes to roughly 68% of the total GDP and employs 76% of the workforce.

The banking sector, composed of 12 banking groups including Caixabank, Sabadell, and Santander, greatly contributes to this total, but by far the most important tertiary industry is Spain’s tourism sector. The tourism industry in Spain is by far the biggest source of income for the country. Spain is the second most popular holiday destination in the world after France and the tourism economy accounts for around 12% of the country’s total GDP and employs around 13-5% of the total workforce.

What is the richest region in Spain?

Spain’s autonomous region of Catalonia, which includes the major tourist destination of Barcelona, is by far Spain’s wealthiest region. However, tax revenue statistics indicate that roughly half of the income tax and value-added tax generated in the region goes directly to the central government revenue.

The poorest part of Spain is the sparsely-populated southwestern region of Extremadura bordering Portugal, which has a per-capita GDP of just over two-thirds the national average.

The cheapest place to live in Spain is the city of Bilbao in the northern Basque autonomous region, closely followed by Barcelona and the county’s capital, Madrid.

Why Is Spain’s economy so bad?

The worldwide financial crisis of 2007-2008 greatly destabilized the economies of a number of countries around the world, and Spain was no different.

The financial crisis in Spain, also known as the Great Spanish Depression or Recession, lasted between 2008–2014 and was largely the result of the housing bubble and the accompanying unsustainably high rate of Spain’s GDP growth.

This resulted in a devastating economic downturn for the country, several major Spanish companies entering into bankruptcy, and a dramatic increase in unemployment, which was further exacerbated by the low level of active population in Spain compared to the potential workforce.

However, despite ongoing political uncertainty, Spain experienced robust economic growth after exiting its financial crisis. By 2019, it was enjoying the fastest growth rate of all the major eurozone countries, and the unemployment rate decreased from 15.3% to 14.1% in the same year.

Nevertheless, the IMF expects Spain to enter into another recession due to the severe economic impact of the COVID-19 pandemic. The total unemployment rate for 2020 is estimated to have increased to around 20%, although this is optimistically expected to decrease once again to around 17.5% in 2021.