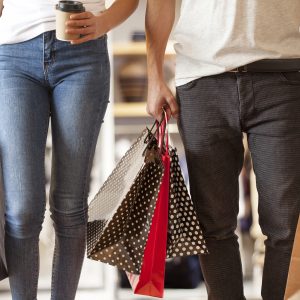 Shoppers are cutting back their spending as the cost of living soars, new figures show.

Total sales were down 0.3% in April, the first decline in 15 months, according to the latest monthly report from the British Retail Consortium (BRC) and KPMG.

“The rising cost of living has crushed consumer confidence and put the brakes on consumer spending,” said Helen Dickinson, chief executive of the BRC. “Sales growth has been slowing since January, though the real extent of this decline has been masked by rising inflation.”

So-called “big ticket” purchases have been hit hardest, as consumers reigned in spending on furniture, electricals and other homeware items.

Thanks to the April sunshine there were stronger sales for garden goods and fashion, particularly occasionwear as consumers prepared for summer and this year’s wedding season.

Food and drink also bounced back with 3% growth in April, although this was largely due to Easter falling later this year, according to Paul Martin, UK head of retail at KPMG.

“With interest rates and inflation rising and the Bank of England warning of a possible recession, the squeeze on disposable household income is starting to have an impact on the high street,” Martin said.

“Against a backdrop of falling consumer confidence, the retail sector has a bumpy time ahead as they face spiraling cost pressures from all directions.

“Many retailers will have no choice but to raise prices to protect margins, but the longer we see high inflation and real household incomes falling, the more likely it is that consumers will change their spending behaviour, prompting a decline in the health of the retail sector and possibly more casualties on the high street.”