A new Cryptocurrency is born

TRON is a decentralized entertainment content-sharing platform that utilizes blockchain technology – basically, TRON (and its cryptocurrency Tronix – TRX) is the new kid on the block(chain). The cryptocurrency was first introduced to the world when it launched its ICO on September 9, 2017, just about 4 months ago. The platform was founded by the Singapore-based non-profit foundation called the Tron Foundation.

TRON is targeting the huge trillion dollar entertainment industry with its new protocol. Currently, most of the user traffic and data is in the hands of the fortunate few – Google, Snapchat, Amazon and Facebook. Additionally, digital entertainment content is controlled mostly by apps (and companies) like the Apple Store and the Google Play Store.

Now, through the TRON platform, consumers can access the entertainment they want directly from the creators. This includes taking away control of data and traffic and returning ownership to its users.

According to the ICO’s Whitepaper, the company is following the philosophy espoused by Dr. Tim Berners-Lee (the inventor of the World Wide Web). According to this philosophy, all protocols, from the time of their inventions, should be used as an asset for all human beings, rather than as profit making tools for small groups.

Where does TRON stand right now?

TRX currently has a market capitalization of $3.47 billion, but it has also reached as high as $7.5 billion since its launch. The digital currency is current trading at $0.052.

However, many analysts feel that this is not going to last long. According to Global Coin Report, TRON’s prices can only go up, and they will soon. TRON and Ripple fans feel the same way; Reddit conversations about the two cryptocurrencies are unconcerned about the current price dips.

Why is TRON expected to Succeed?

Last year, investors saw Ripple surge more than 37,000% to reach the $2-$3 mark. TRON has likewise done really well since its launch. In fact, many investors feel that Ripple may have run its course and that TRON has more to offer in the long run. 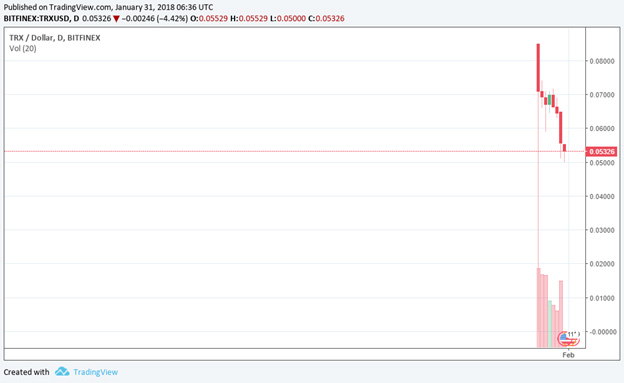 TRON just announced that it has entered into a partnership with Global Social Chain. This means that Tronix will become the cryptocurrency with the largest Daap (Digital Audio Access Protocol) database on the planet. And this in turn means a surge in the price of the cryptocurrency.

Pretty much on the heels of this announcement has come another – the release of the crypto’s First Beta Version Exodus in March this year. This move is expected to attract more investors to the platform – if the release is a success. Given the fact that the TRON platform is aimed at the trillion dollar entertainment industry, if this venture takes off, you can expect the prices to shoot through the roof.

Added to this is the “Fear Of Missing Out” syndrome that has gripped the cryptocurrency market right now. People have seen the rise of Bitcoin and Ether from a few pennies to the thousands that they are trading at right now. Ripple also began at sub-dollar levels and is already trading at the $1 plus marks (and is expected to grow even further this year).

As mentioned earlier, TRON is looking at multiple growth phases in which it will implement various blockchain technologies. Here is what TRON has already charted out for its future:

The clearly outlined growth strategy has attracted a lot of investors and fans to TRON. Which is why investors definitely feel that TRON is a keeper.