Many customers across the UK have been scammed into buying payment protection policies. The Financial Services Authority expressed concern that thousands of Brits have been mis sold payment protection insurance and because of this, the high street banks must now shell out millions of pounds in compensation pay-outs to its customers.

As consumers up and down the country seek to get their money back which was wrongly taken, the PPI Claims Company can reveal the top insurance scams that have caught media headlines for being daft and those dodgy cons that have failed.

In April 2011 39 members of a Luton gang were involved in a £5.3 million ‘cash for crash’ insurance scam; the largest fraud ring the industry has ever seen.

The case, called Operation Exhort, involved a five year investigation by Bedfordshire Police and three defendants from the criminal enterprise resulted in being jailed. A further 33 defendants pleaded guilty to a variety of offences in connection to the insurance scam.

British law graduates confessed to a false insurance scam in Brazil in which they claimed they were robbed.

Graduates Shanti Andrews and Rebecca Turner claimed they were mugged of their laptop, purse, mobile phone and digital camera during a bus journey in Brazil to pocket an insurance pay-out.

But the 23 year-olds later went on trial and admitted to charges of attempted insurance fraud. The pair were sentenced to community service and fined £3,900.

Fraudster shot himself as part of a string of scams

In March 2011, an insurance fraudster shot himself in the chest to claim money in compensation. It was only after he confessed that he was the gunman, that it was revealed he has created a string of scams over the past 16 years.

In April 2011 an unprofessional footballer was jailed for a year after trying to scam an insurer out of millions of pounds. 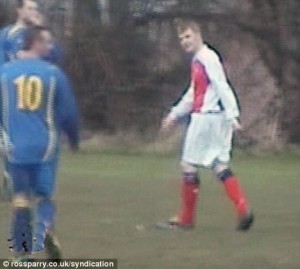 James Shikell was involved in a car accident in 2002 and won £30,000 in compensation from the Motor Insurers’ Bureau. He claimed his injuries were so severe that he required a further £1.35 million in damages to cover loss of earnings and care costs but a private investigator filmed him playing a football game “vigorously and competitively”.

Shikell’s father was also sentenced for one year for his part in supporting the fraudulent claim and a footballing teammate was fined for making a false statement. oe” Darwin made headlines with the most outrageous insurance scam ever.  The father faked his own death in a canoe so his wife could claim £680,000 from pensions and insurance companies.

The 60 year-old conman was so desperate to wipe his crippling debts he decided to paddle to his ‘death’ and ‘drown’ at sea, resulting in a six-year jail sentence and the grief of his two sons.

Best friends Katie Ashcroft, 24, and Jodie Jackman, 23, faked that they had been in an accident and arranged for a ‘Mr Fixit’ to crash their cars into each other before ringing their insurance companies to falsely claim.

Friends and family members pretended to be passengers in the cars and filed fake injury claims. The scam was only exposed when emails between the pair were found.

Some pensioners from California, America were convicted in 2008 in a murder scam.

The OAPs, Helen Golay (73) and Olga Rutterschmidt (50) were put behind bars after killing two homeless men and collecting millions of pounds in life insurance.

Golay was found guilty of the murders in 1999 and in 2005 and sentenced to a life sentence; whereas her accomplice was convicted of conspiring to murder for financial gain.  The trial was known as the trial of the Black Widows.

Gordon Thomon, 32, left his fiancée Elizabeth Hingston, 24, in agonising pain in a sick stunt that involved him putting a brick under her left limb and jump on it with both feet.

The pair planned to sue the council and claim a wall had fallen on her as part of the bogus scam but were rumbled when the scheme was filmed on a mobile phone. ight people were convicted for their part in a car insurance fraud scam worth tens of thousands of pounds.

Five men and three women were sentenced at Leicester Crown Court following an investigation into fraudulent claims related to damage and injuries resulting from four collisions in Leicester and Birmingham.

The ringleader, who was involved in setting up one of the false collisions, even set up a fraudulent claims company as part of the scam. The conspirators netted nearly £50,000 which would have doubled had the police not rumbled the scheme.

In April 2011, a GP doctor in Harrow, Great London appeared before a trial accused of fraud estima

ted to total around £4 million.

Dr Lawrence Martin Adler, of Belmont Health Care, has been alleged of being involved in “after the event” insurance claims relating to personal injury accidents.

The 58-year-old appeared at Southwark Crown Court alongside five other defendants, a solicitor and insurance workers as part of an on-going investigation.