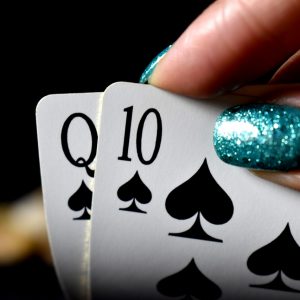 The invention of Texas Hold’em, perhaps the most popular variation on the classic card game poker, is an event that remains shrouded in mystery. While we now know a lot about the history of the game and its rise to prominence, there is little in the way of concrete evidence to show us exactly where the game was invented and by who. Well, we can make a pretty good guess at where Texas Hold’em began.

Like all things gambling, it wasn’t until the game reached Las Vegas that it really took off. We know the players who brought the game to Vegas; they included Crandell Addington, Amarillo Slim and Doyle Brunson. Texas Hold’em was the first poker variant to introduce the concept of aces high, whereas an ace had always been considered to be a 1 before.

Originally known simply as ‘Hold’em’, Texas Hold’em was perceived almost instantly as “the thinking man’s poker” because there were four rounds of betting, instead of the usual two. This gave the players more room to devise and implement strategies to win the game.

The Golden Nugget Casino, situated in downtown Las Vegas, was the first casino to offer Texas Hold’em to punters. In fact, for some time it was the only casino that offered Texas Hold’em. The casino’s location and décor didn’t exactly attract the ritziest of Vegas gamblers. However, the game itself was beginning to pique the interest of professional players and they began searching for a more suitable arena in which to play.

By 1969, the Dunes Casino, located on the Las Vegas Strip, was offering Texas Hold’em and was the casino of choice for numerous professional players. The prominent location and steady stream of inexperienced players meant that the pros were able to clean house and walk away with some handsome profits

Also, in 1969, Tom Moore founded the Gambling Fraternity Convention, an annual gathering that hosted a poker tournament. From its inaugural year, the Gambling Fraternity Convention offered Texas Hold’em, among other games. It was in 1970 when the rights to the convention were acquired by Tom Moore, and it was duly renamed the World Series of Poker. They also moved the game to their own casino, Binion’s Horseshoe in Las Vegas.

After the first year of the World Series, a journalist named Tom Thackery suggested that the main event should be a game of Texas Hold’em with no betting limit. Ever since then, no-limit Texas Hold’em has become the main event of the convention. As time has gone on, the event has exploded in popularity, going from dozens of entrants in the early days to hundreds that apply today.

It was during the 1980’s that interest in the game moved beyond Nevada’s borders. California had legalised card rooms where players could play draw poker. However, Texas Hold’em was initially deemed to be prohibited by an existing statute that outlawed a different game entirely. However, in 1988, a judge ruled that Texas Hold’em was legally different to the banned game and the game was permitted throughout the state of California. The game was then introduced to a European audience by two bookmakers, Liam Flood and Terry Rogers.

Today, Texas Hold’em is one of the most popular poker variants. It witnessed an explosion in popularity during the early 2000’s, owing in large part to the arrival of television exposure. Other factors that saw the game explode in popularity around the world were the availability of the internet, and therefore the rules of the game, and an increase in popular literature available that also instructed players on how to play the game.

Moving into the 2010’s, the growing popularity of Texas Hold’em can mostly be attributed to online casinos, which have made the game available anywhere and anytime to players. Increasingly sophisticated AI has proven to be a very effective training tool for players, and easy access to the game has meant that dedicated players can improve their skills wherever they go.

But not all online casinos are created equal, and you’d be surprised how many of them struggle to represent classic casino games properly in digital format. Along with the classic card games are a plethora of new takes on old classics. Yet, even amongst all these options, Texas Hold’em really stands out.

As well as being featured prominently in online casinos, Texas Hold’em is also very well represented in the realm of film. There are numerous classic movies that feature a casino and card games. If characters are playing poker, it is usually Texas Hold’em. It has become the standard version of poker in many places. In fact, outside of professional circles, the terms poker and Texas Hold’em are often used interchangeably.

Another less appreciated development that has contributed to the rise in interest regarding Texas Hold’em is the arrival of the hole card cam. This is a camera that enables the viewers watching a game of Texas Hold’em to see the hole cards, the cards that each player has and which are combined with cards in the middle of the table to produce a 5-card hand. This meant that the viewers at home know who was bluffing and who had genuinely strong hands while the players were none the wiser.

Texas Hold’em has grown to become perhaps the most popular form of poker on the planet. There are many people who learn to play Texas Hold’em before they learn classic poker. The extra rounds of betting allow for more in-depth strategy and more nuanced decision making than regular poker. The rise in popularity of the game, as reflected in the number of players, has meant that we now see ads for Texas Hold’em tournaments on TV. The World Poker Series continues to be a huge draw, both physically and on TV.

Despite its humble beginnings, Texas Hold’em is a global superstar today, as are many of the players.