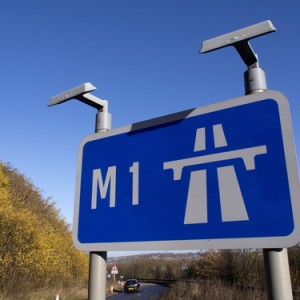 Highways England and the Department for Transport announced on Tuesday that section of the M1 spanning the East Midlands and South Yorkshire has been upgraded to a smart motorway in the final phase of GBP205m improvement scheme.

The upgraded section between junction 28 (Mansfield) and junction 31 (Worksop) went live on 5 April 2016, with Highways England contractors having worked 1.75 million combined hours to complete the scheme. It is the first smart motorway in the area where the hard shoulder has been permanently converted to an extra lane as part of measures to tackle congestion and improve journey times for the estimated 95,000 drivers that use this stretch each day.

Part of a GBP15bn government investment in motorways and major A roads by 2021, the upgraded section of the M1 includes 40 miles of extra lanes, 140 electronic signs, 94 CCTV cameras with infrared capability, 20 emergency refuge areas and 17 overhead gantries.

Variable speed limits are expected to keep vehicles moving and CCTV will be used 24 hours a day to alert staff in Highways England’s regional control centres near Nottingham and Wakefield to respond quickly to incidents and, if necessary, closing lanes using red ‘X’s on overhead signs.

Highways England, which works with the Department for Transport to operate, maintain and improve motorways and major A roads in the UK, said it opened a similar scheme on the M25 just over a year ago which has resulted in the busiest journey times being halved and the number of collisions reduced by a fifth.

“The completion of the smart motorway on this section of the M1 will make a real difference to people travelling between Mansfield, Chesterfield and Worksop, delivering better and smoother journeys, helping businesses and boosting the local economy.

“This is all part of our plans to build a road network that is fit for the future, with a record GBP15bn going into improving our roads, reducing congestion and keeping Britain moving.”

“The new smart motorway will tackle congestion and improve journey times for the thousands of drivers who use it every day.

“We’d also like to thank drivers for their co-operation during the work and look forward to improving journey times for those travelling between the East Midlands and South Yorkshire.”