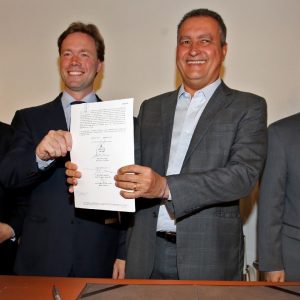 The Porto Sul project, which involves the unification of the port’s terminals, was agreed at a signing ceremony in Brazil on the 21st of May 2019. The ceremony was held in Salvador, Bahia at the Governor Acts Hall, and reported on by the government of Bahia. CEO Benedikt Sobotka represented Eurasian Resources Group, one of the project’s principal signatories, at the event.

Works at the port are expected to commence in the second half of 2019. All necessary environmental licences have been acquired by Porto Sul to operate in the area, and it is expected that the implementation phase of the project will create around 30,000 jobs, with a further 10,000 employment opportunities created once the port becomes operational. When completed, the port will contain extensive transport capacity and storage facilities for several key commodities of the region, including grain and fertilisers, with capacity for up to 41.5 million tonnes of iron ore per year.

ERG operates the Pedra de Ferro project in the State of Bahia, which is expected to produce approximately 20 million tonnes of iron ore per year. Benedikt Sobotka commented on the strategic nature of the partnership between ERG and the State of Bahia, expressing the Group’s pleasure at this opportunity to further strengthen the cooperation between the two parties.

The agreement signed on the 21st of May represents a vital step in the acceleration of the Porto Sul development project to ensure commercial viability and economic development can be reached in the right balance. ERG is now commencing on the next phase of cooperation with a focus on delivering a R$10 billion investment programme to contribute to the ongoing success and development in the region.