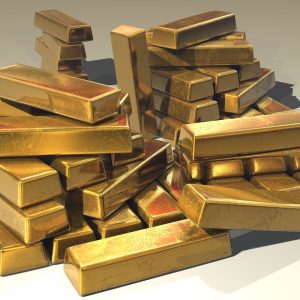 What assets do you think of trading when you believe inflation is on the horizon? If the answer is gold, you are not alone. Gold prices have been considered as a hedge for inflation for decades. Gold prices are thought to arise when inflation rears its ugly head, outperforming stocks and bonds when prices rise. The reality is that gold does not generally outperform during periods of inflation. Different studies performed on the price of gold when inflation is increasing show that gold prices do not exceed other assets. The price of the yellow metal is generally negatively correlated with the movements of the U.S. dollar and is considered an alternative to paper currency in turbulent times.

Inflation is often viewed as higher prices, but it’s not just for one item or service. Many electronic things which used to cost more money previously are now cheaper today. Inflation is a rise in the prices of a basket of goods and services. The most common measure of inflation is the Consumer Price Index, which is calculated differently from country to country. In the United States, a key gauge of inflation that the Federal Reserve uses is the Personal Consumption Expenditures. While inflation can eat into your savings, it’s considered positive for the overall growth of an economy. Companies need some pricing power to enhance their performance over time.

Inflation can be created because of demand or supply. If there are supply chain disruptions and people cannot get items, they will increase the price they pay for those items. For example, during the pandemic, the supply chain of semiconductors was disrupted. The lack of chips made it difficult for car manufacturers to build cars. The lack of inventory of available vehicles started to increase the price of automobiles.

Demand-driven inflation is when demand for goods or services increases but supply remains the same, buoys prices. When economic growth rises and people begin to make more money, their purchasing power rises and allows consumers to buy more goods and services. The competition for items begins to increase, putting upward pressure on prices.

Is Gold Correlated to Inflation?

How is Gold Viewed?

Gold is often viewed as a hedge to currency devaluation as opposed to an inflation hedge. Since online trading of gold is quoted in U.S. dollars, it becomes less expensive in other currencies when the dollar’s value declines. When this scenario occurs, the price of gold adjusts higher to accommodate for the lower cost of gold in dollars. The reverse is true when the value of the dollar exchange rate declines. Gold prices are often viewed as a safe-haven products when currencies trade under pressure. When investors look for a dollar devaluation, they will usually look to gold as an asset that will hold up well during turbulent times for the greenback.

The upshot is that gold historically has mixed returns results during periods of elevated inflation. There are several other assets, such as inflation-adjusted bonds (TIPS) that outperform when inflation is rising. When the price of lots of assets increases, inflation is considered an issue, not when just one or two prices increase. Inflation in small doses is also considered a positive sign as it provides pricing power to companies. Many investors view gold as a hedge against adverse currency changes. Since gold is quoted in U.S. dollars, an increase in the greenback exchange rate will often lead to a downward adjustment in the price of gold.