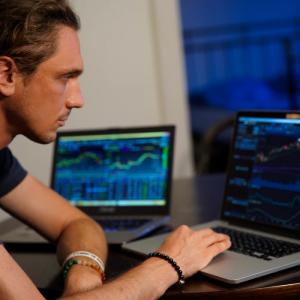 Only for the past 10 years, technology in trading has undergone significant changes, especially the ways of direct access to the market with ultra-low latency. In general, these solutions can be grouped as follows: software technologies and algorithms used in a stock trading app development , data processing technologies and placement and connectivity strategies for trading systems

The trading of highly liquid instruments went through a process of evolution from direct trading between market participants on trading desks to trading using computer terminals (also known as transaction management systems) through automated exchange systems. Then to the use of computer programs, which fully control the processing of trades.

At every step in its evolution, software has automated functions that used to be performed by humans:

– Algorithms have automated the traders’ function, breaking down orders into smaller ones;

– Order routing routers have automated another function of traders, selecting in real time the most appropriate one among several trading venues to place an order;

– Automated market making (a form of high-frequency trading) eliminated the need  of specialist willing to make buy/sell trades and profit on the spread;

– The role of the arbitrageurs has also been automated by firms that specialize in high-frequency trading.

As markets have become increasingly “electronic,” the time scale of price movements has been greatly reduced in the entire trading process.

Almost no one doubts that the robotization of trading will be gaining strength.

How realistic is this perspective? Considering the money that large funds are investing in the IT sector, it is clear that in general the trend is growing. And it is possible that in the future really solid investment companies will disperse all their traders and replace them with robots (and programmers will become the main staff units). Competition on the stock market may well turn into a battle of technologies neither the battle of specialists.

Trading industry is constantly evolving, there are new promising directions. And we want to tell you more about the most promising ones :

Not so long ago so called “trading robots” appeared. These are automated systems that are used for trading without human participation. That is, the robot performs buying or selling by itself. For this purpose it has certain algorithms and rules.

The technology is actively used in many countries around the world and shows good results. The advantages of trading robots include:

Despite a lot of apparent advantages, any software has its disadvantages. It is primarily concerned with analysis. The robot does not read the news and cannot react to unexpected bursts in the market.

Besides, in order for your robot to work efficiently, you need a competent specialist who not only knows how to create a program code, but also develops a trading strategy.

Artificial Intelligence is actively used in various spheres, including trading. Its possibilities are virtually unlimited. Neural networks allow to minimize human intervention in the process of trading. They are a kind of robots. The main difference is that neural networks have the ability to learn. Robots work only on the code, which has been previously developed by a programmer, and they can’t improve themselves.

Neural networks make it possible to analyze not only the current market fluctuations, but practically any data. It allows us to combine fundamental information with technical information.

Neural networks are able to process simultaneously a huge stream of incoming data, to learn and quickly adapt to any fluctuations of the market. Unlike trading robots, neural network does not need to involve programmers for its rearrangement under new conditions.

A relatively new concept on the trading market is behavioral trading. It is based on psychological aspects of perception of market situations and trading processes. That is, in this case there is carried out a careful analysis not only of the technical side but also of human behavior.

Leading traders realized long ago that mathematical analysis alone is not enough for getting the full picture and predicting the market fluctuations. It’s much more effective to additionally use behavioral factors. It was noticed that the same reaction of market participants to different situations leads to repetition of market formations. In other words, behavioral trading allows predicting with high accuracy the development of events in a certain situation, finding regularities and using them in work.

A combination of several trends shows great results in trading. The result is a kind of symbiosis of effective management and psychology. It opens new horizons and opportunities for traders to earn.

The cluster analysis is the most effective way to analyze the market. It is a highly accurate method of price prediction based on the volumes of trading operations.

For this purpose, a detailed analysis is carried out for a certain time period, during which homogeneous operations – buying or selling – are performed. As a result of data collection, the clusters are formed with the total volume of trades, in which the transactions were made at a certain price. Thanks to this the trader can predict the movements on the market with a high degree of probability.

To make the task easier, charts are built. It is an informative way to visually see the trend.

Technologies grow fast with the speed of light and new technologies can be used as a complex that provides the maximal result and allows to avoid considerable financial losses irrespective of market changes and their nature. No one knows what will happen when we are eighty years old? How will the world trade?