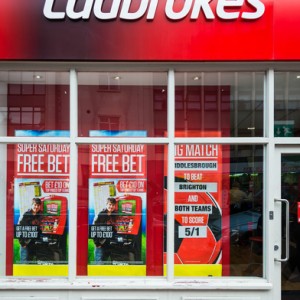 The UK’s Competition and Markets Authority (CMA), an independent non-ministerial government department with responsibility for carrying out investigations into mergers, markets and the regulated industries and enforcing competition and consumer law, reported on Friday that its current investigation into a merger between betting companies Ladbrokes plc (Ladbrokes) and Gala Coral Group Limited (Coral) has provisionally found that the merger may give rise to concerns about competition in many local areas.

In order to address these concerns and for the merger to be conditionally cleared, the CMA said that approximately 350 to 400 licensed betting offices may have to be sold, in the event that CMA’s final report confirms its provisional findings and considers divestiture to be a suitable remedy.

Ladbrokes and Coral are, respectively, the second and third largest bookmakers in the UK by number of shops, known as licensed betting offices. Both companies also provide telephone and online betting and gaming products, as well as ‘on-course’ services at certain racecourses. The companies also operate greyhound tracks.

The merger is being investigated by CMA’s group of independent panel member, which has looked in detail at the large number of areas where Ladbrokes and Coral shops compete. It has published a summary of its provisional findings which reveals that the group has identified 659 local areas where it provisionally found that the merger may be expected to result in a substantial loss of competition. The group considers that this could lead to a worsening of the offer made to customers at both a local and national level.

According to the CMA investigating group, as there is an overlap of many of the problematic local areas, divestiture of a betting shop in one local area may also remedy the concerns in other areas. Any divestiture would have to be substantially completed before the merger can go ahead.

Publication of the group’s final report is expected by the end of July 2016. However, in view of the scope and complexity of the investigation which involves numerous local areas, the CMA has extended the deadline for its final report by eight weeks to 19 August 2016.

The CMA added that it has not found competition problems that may be expected to arise from the merger in relation to other parts of the two businesses.

“We’ve provisionally found that the merger between two of the largest bookmakers in the country may be expected to reduce competition and choice for customers in a large number of local areas. Although online betting has grown substantially in recent years, the evidence we’ve seen confirms that a large number of customers still choose to bet in shops – and many would continue to do so after the merger.

“For these customers, competition comes from the choice of shops in their local area and it’s they who could lose out from any reduction of competition and choice. Discounts and offers of free bets to individual customers are ways betting shops respond to local competition which could be threatened by the merger. We’re also concerned that such a widespread potential reduction in competition at the local level could worsen those elements that are set nationally such as odds and betting limits.

“We’ll now consider responses to our provisional findings before coming to a final decision. If our provisional findings are confirmed and divestiture would be a suitable remedy, Ladbrokes/Coral may have to sell a large number of shops to a suitable purchaser or purchasers in order to preserve competition in those local areas. We’ll need to look closely at the exact number of shops and areas that would be involved – the overall size and complexity may mean that the sales need to be substantially completed before the merger can go ahead.”