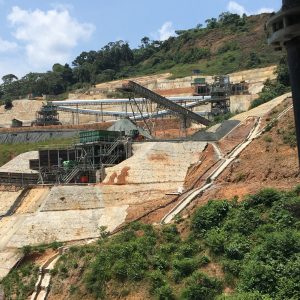 The project, which is being implemented by the Lowa Alliance ASBL, is being undertaken in the Democratic Republic of the Congo, where Gerald Group is currently involved in a ground-breaking tin mine.

The Logu project was created to provide local communities with access to potable water. Organisers predict that the initiative will help more than 500 households in Logu village, in the vicinity of Alphamin Bisie’s logistics and export hub.

Since the implementation of the Bisie Tin Project, Logu’s population has increased significantly. Villagers have to walk several kilometres to the nearest river to source water and carry it back again to their homes.

Water-borne diseases are extremely common in Africa, where they represent a major threat to health, and ultimately, lifespan. Analysts estimate that almost a billion people lack access to clean, safe drinking water, equating to 12.5% of the global population.

Some African women regularly carry plastic jerry cans weighing up to 70 pounds on their backs, the equivalent of carrying a baby hippopotamus.

World Health Organisation (WHO) figures suggest that fixing the water crisis is not only achievable but makes sound business sense. WHO estimates that every $1 invested in sanitation and clean water sources produces an economic return of up to $34.

Gerald Group was founded in the United States in 1962. It is the world’s oldest and largest and longest-running independent and employee-owned metal trading house.

With headquarters in London, Gerald Group is led by CEO and Chairman, Craig Dean.

The organisation is dedicated to implementing sustainable and socially responsible practices to contribute to economic development and world trade.

Through its investment in the Alphamin Bisie tin mine, one of the largest high-grade tin concentrate producers in the world, Gerald Group has acquired the extendable right of exclusive offtake for the next five years. This will enable the Group to supply tin concentrate to approved smelters around the world for processing and the sale of conflict free tin particularly to the European and North American markets.