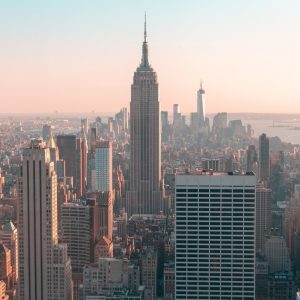 Eric Pulier is an entrepreneur responsible for creating several startups influential in the technology industry. His latest project is the Vatom NFT Platform, which aims to expand the World Wide Web using programmable, AR, and VR traversing NFTs called Vatoms.

The first NFTs, Vatoms, are set to revolutionize how we socialize and do business online and face to face. Read on to learn more about Pulier’s life and the Eric Pulier NFT concept behind Vatoms.

Eric Pulier grew up in Teaneck, New Jersey, a suburb in the New York metropolitan area. As the child of a tech enthusiast, Pulier voraciously devoured IT manuals until he taught himself how to build his first computer in the fourth grade.

Now playing the role of a “tech enthusiast” parent himself, Eric Pulier has four children with his wife. The family lives in Los Angeles, which Pulier first moved to in 1991.

Pulier’s move to LA in 1991 signaled the beginning of his impressive career as a tech industry entrepreneur. His first company, People Doing Things, used technology to solve health care and education problems.

His other ventures include Digital Evolution, Desktone, Media Platform, Akana, ServiceMesh, among others.

Each NFT is unique and could be all sorts of things: an image, a video, or even a Tweet. They can also represent objects in the real world, allowing consumers to digitally verify their ownership of a physical object or redeem the NFT for a real-world item.

The Eric Pulier Vatom stands apart from other NFTs because of how easily it transfers into AR and VR. Vatoms are also fully programmable and instantly transferable between users and across devices.

With about 30 million Vatoms issued to 2 million wallets overall, the Eric Pulier NFT (also known as Vatoms) style is quite popular. Fortune 500 companies like Verizon, Pepsico, and Nestle have chosen the Eric Pulier Vatoms over other NFTs.

Eric Pulier expects NFTs to revolutionize the economy because they allow businesses to offer exclusive deals and products to their customers and consumers to verify their purchases’ legitimacy with the blockchain records.

The Eric Pulier NFT concept even involves NFTs entering the realm of government documents like driver’s licenses, marriage certificates, or voting records. Ideally, the Eric Pulier Vatom would allow users of all kinds to quickly and easily verify their history stored on a blockchain.

With the development of the upcoming Vatom NFT Platform, creators and businesses can sell “direct to avatar” renditions of the Eric Pulier Vatom. These products would exist exclusively in the form of an Eric Pulier NFT with no physical equivalents available.

These Eric Pulier Vatom types would be NFTs used to decorate users’ avatars in the future NFT-driven world.

Blockchains are a type of database where sequential “blocks” store the data. Though typically associated with cryptocurrencies, blockchains also house the data for NFTs.

When a cryptocurrency sells tokens to fund its development, it allows customers to exchange those tokens for goods or services once the project reaches completion. These tokens are called utility tokens. VEE ERC-20 utility tokens power the Eric Pulier Vatom.

The Vatom NFT Platform which was showcased in the Cannes Lyons Festival this past June 2021, consists of five parts:

Additionally, the platform introduces “interscripted,” a distributed coding framework that gives the Eric Pulier NFT dynamic AI capabilities. Interscripted NFT scripts will be available for purchase on the Vatom Marketplace.

With a long and influential history in the tech industry, Eric Pulier continues to push forward with impressive new technology in the Vatom NFT Platform launch.

The Eric Pulier NFT Vatom is the most widely used NFT in the business world. With the upcoming launch of the Vatom NFT Platform, its dominance will likely only grow. We may even see it become “the future of human engagement,” as the Eric Pulier LinkedIn profile puts it.