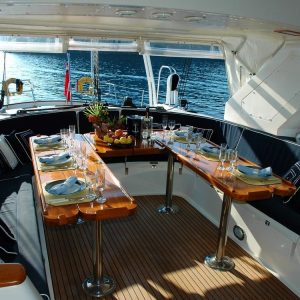 Chartering a yacht and or catamaran for an entire holiday is no longer just a privilege of the wealthy. Boating has become the new trend as, instead of flocking instantly to the beaches or for city breaks, check out what boat chartering companies have to offer and look to get out onto the world’s waters. The calm of the water, the open space and the opportunity to see some of the most amazing places in the world from a different vantage point is proving extremely appealing.

One company that has been extremely successful in catering for those who want to holiday out on the world’s waters has been Borrowaboat. Founded by enthusiasts who want to make boating more accessible, Borrow a Boat is a leading boat rental and yacht chartering marketplace. The company has grown considerably since its establishment in 2017 and continues to do so. This article is a look at Borrow a Boat’s growth, its new round of crowdfunding, the factors behind the company’s growth and what it means for Borrow a Boat and its customers.

Borrow a Boat is already the UK’s leading boat rental marketplace, has been expanding internationally and continues to do so. Just now, the company is on another growth drive, having announced a round of crowdfunding with Seedrs. The target? 750 K.

Don’t be surprised if Borrow a Boat smashes this target. The company has a healthy knack of securing funding. Since 2017, it has managed to secure several million, a lot of which has been through crowdfunding. Growth is the main aim and successful crowdfunding in 2021 has enabled the company to expand into the US, Canada, New Zealand and Australia. This ability to raise funds has been one of the reasons the company considered the ‘Airbnb of boats’ has been able to keep moving towards its goals.

Expansion is an exciting project of which investors want to be part. That alone isn’t enough to invest, however, but it won’t worry Borrow a Boat. The company’s strong performance has certainly helped to persuade investors. Although travel has been making a comeback since COVID, in 2021 it was still struggling, but Borrow a Boat was still able to achieve higher revenues than in 2019. This year, the market looks set to come back much more strongly and Borrow a Boat is enjoying the results of this, as it is now clearing £1 million a month in revenue.

Another reason for the growth for Borrow a Boat has been the three acquisitions the company has achieved in the last 12 months. In March 2022, the company made news in the industry by acquiring Beds on Board, a non-sailing boat hire company, and consolidating its position further as the UK’s leading boat rental marketplace. The acquisition enables Borrow a Boat to add more than 5,000 boats to its offering and bring more than 30,000 users to the platform. Boat owners on Beds on Board have been able to list on Borrow a Boat. Beds on Board was launched to provide boat owners and accommodation seekers ‘another way to stay’. Boat owners could monetise their vacant boats, offset their ownership costs and offer competitively priced accommodation.

The month before, the company again made industry headlines by acquiring the Dutch boat rental marketplace Barq, which aimed to connecting boat owners with sailing enthusiasts who wanted to get out onto the water. Strategically, this was a specially well executed acquisition, as Barq itself had, in June 2021, struck a deal with Bordeaux-based online boat and yacht rental marketplace Samboat.

Its other acquisition has been of the high-end charter brokerage Helm. The acquisition, also announced in June 2021, not only strengthened Borrow a Boat’s position as the leading UK boat rental marketplace, but also allowed the company to expand its portfolio of luxury yachts and catamarans.

What does all this growth mean for the company and its customers?

As a result of this growth, Borrow a Boat has expanded its fleet of boats, allowing customers a greater choice of boats and of destinations. The acquisitions of Beds on Board and of Barq have each broadened the company’s selection of boats by around 5,000 vessels. In the case of Beds on Board, the acquisition has also created extra diversity in the company’s offering by allowing them to provide someone looking for a less conventional form of accommodation while still being able to enjoy a city break. The marketplace’s deal with Helm also gives people more of a choice, but in the high-end category of boating.

For the company, the acquisition means a step towards its goal of increasing the accessibility, affordability and inclusivity of boating. If the company can achieve its target with the new round of fundraising, the money will support plans for expansion into Italy, Spain, German and France.

It’s not just about building a bigger fleet and making more destinations available to customers, however. The company will also put funding into UX, UI and automation plans to help it cope with its fast-growing revenues.

Borrow a Boat is growing fast, acquiring companies and consolidating its position more and more firmly as the leading boat rental marketplace in the UK. Chartering yachts and renting boats is becoming more popular as people seek something different from their holidays and now have affordable options than can help them achieve this. These are exciting times for Borrow a Boat — and will become even more so if their most recent fundraising round is successful.