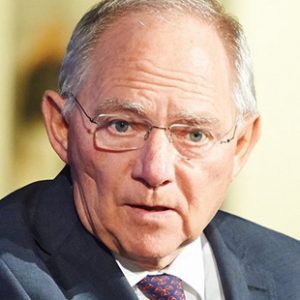 It is the end of an era. Wolfgang Schäuble, Germany’s finance minister since 2009, is stepping down. Following the recent election, Angela Merkel’s Christian Democrat Party has been left weakened by the election. She no longer has enough seats to govern Germany alone, so she will have to form a coalition. The Free Democratic Party have expressed interest in running the Ministry of Finance, which could mark a period of change for Germany’s fiscal policy.

Since becoming finance minister in 2009, Wolfgang Schäuble has been a powerful advocate of austerity. He has overseen a period of intense economic change. The Eurozone has been under immense pressure at times, most notably during the Greek debt crisis, but throughout, Schäuble has fought hard to save the Euro.

President Trump has been highly critical of European Central Bank (ECB) monetary policy, which has pushed the euro exchange rate lower. Trump believes the euro is currently undervalued, which is giving Germany a strong economic advantage. However, Schäuble points out that Germany is not responsible for ECB policy, which has weakened the euro against the dollar.

Schäuble agrees that ECB policy is too “loose” for Germany. In an interview with Tagesspiegel, he said:

“The euro exchange rate is, strictly speaking, too low for the German economy’s competitive position. When ECB chief Mario Draghi embarked on the expansive monetary policy, I told him he would drive up Germany’s export surplus…?I promised then not to publicly criticise this [policy] course. But then I don’t want to be criticised for the consequences of this policy.”

Schäuble has also been fiercely critical of the ECB’s quantitative easing policy, which he partly blames for the rise of the right-wing populist party, Alternative for Germany. Schäuble says voters are worried about the stability of the euro and low-interest rates on their savings, so they are turning to populist parties such as the AfG, which has enjoyed unprecedented success in the recent election.

The chancellor’s fiscal policy is also responsible for Germany’s large budget surplus, which hit a record 18.3 billion euros in August. Germany is effectively earning more than it is spending, which is affecting trade with countries such as the US. Countries that trade with Germany, in particular, the United States, have to spend more. This is pushing the value of the euro down against major currencies such as the dollar.

Germany’s economic prudence and export success are to be admired, but in the long-term, it needs to achieve a more balanced growth.

Thanks to his tough stance, Mr Schäuble is arguably one of the most hated figures in Greece. At the height of the Greek debt crisis, Schäuble argued for Greece to be ejected from the single currency for non-payment of its debts. He forced Athens to introduce stringent budget cuts in the midst of a serious domestic depression, arguing it was the price Greece needed to pay for its bailout money from the International Monetary Fund.

As the debt crisis deteriorated and Greece moved ever closer to a default on its debt repayments, the ensuing turmoil pushed the euro into a serious slump against other major currencies. Nevertheless, Schäuble was adamant that Greece should be thrown out of the Eurozone, but Angela Merkel took a softer stance and they remained.

The news that Schäuble is stepping down is likely to be viewed with great joy in Greece. But, if they think debt relief may be on the cards in the near future, they could be sadly mistaken. Schäuble has indicated in recent interviews that debt relief is not on the agenda and starting a discussion on the topic would send the wrong message.

“The country doesn’t need a debt cut now, but it must continually work on its competitiveness,” he told Mannheimer Morgen newspaper.

The euro is currently at a low ebb following controversial elections in Catalonia. News that Wolfgang Schäuble is stepping down from his role as chancellor has not improved matters. The forex market is jittery, afraid of the changes looming ahead and concerned that changes in the German parliament could spell disruption in the eurozone and markets. This is likely to depress the euro and boost other major currencies.

Schäuble, whose reputation for toughness is legendary, is passionately pro-European. His economic policies have shaped Germany – and the EU – in the last eight years, but a changing of the guard in the finance ministry is unlikely to see Schäuble’s orthodox financial policies thrown out with the bathwater.